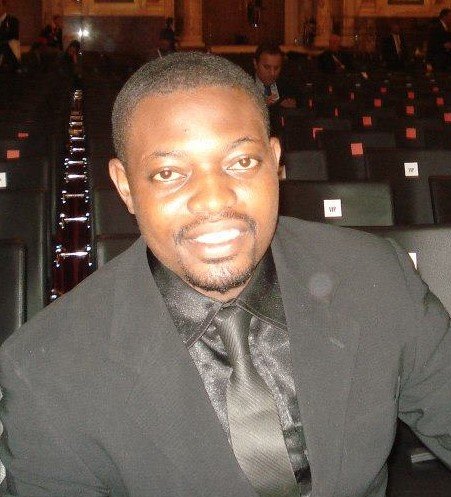 Described by Emile Ndifor of Radio-Yemba, a Dschang based local radio station ‘as the most momentous event in the locality in 2020 so far’, the Green Cities or Cite Verte project was effectively launched on the 21st February 2020 at the Salle Manu Dibango of Alliance Franco-Camerounaise, in front of a chuffed crowd, under the watchful eyes of ALL the local administrative heads in Dschang and foreign partners from France. This project provides an abutment to Cameroon’s attainment of its Intended Nationally Determined Contributions (INDC), pledged during the Paris Agreement on climate change in 2015. Therefore, it provides a glocal approach to REDD+, and showcases local and youth prowess in achieving the SDGs, especially SDG 13 on climate action, in an epoch where climate action is gaining a lot of empathy and global awareness. The CITE VERTE Project emanates from the Atlantic Dialogues Emerging Leaders Program, hosted by the Policy Center for the New South, Morocco.

“A true replica of action time, as required by national and international climate change policies”

What happened before the Launching?

A total of 21 strategic meetings have been convened since November 16th 2019, when the project charter was adopted and a project team appointed (To be coordinated by Nguefack Jovis and Rosalie Tessa). All stakeholders, from the topmost executive in the locality (Senior Divisional Officer) to the people’s representatives (Mayor) and the Government Arm regulating environmental issues (Ministry of Environment, Nature Protection and Sustainable Development) were contacted, who all endorsed the project officially.

A succinct map of our area of action was produced by the team, led by Nguefack Jasper. This map defined the scope of the project, by identifying our areas of action, which was the first of its kind.

The Cite Verte Project was launched in pomp and fanfare, mobilizing the entire Dschang Community, the National TV station – CRTV, all local radio and TV stations in Dschang, but most importantly all the local authorities. This probably explains why the representative of the Divisional Officer termed it “A true replica of action time, as required by national and international climate change policies”. The ceremony which started at 3:30 PM (Local time), saw the Salle Manu Dibango of Alliance Franco-Camerounaise Dschang full to its capacity, with an inherent representation of all the strata of the society. Authorities, foreign partners who were seduced by the project and came all the way from France, direct beneficiaries of the project (Concierges and landlords), indirect beneficiaries (residents), the Bonaventure choir and a multitude of curious students and environmental well-wishers, amounting to about 121 people all together.

What actually is the cite verte project?

Initiated by ICAD Enterprise, the CITE VERTE project is one of the deliverables of the Waste for Development (#W4D) Project. https://www.slideshare.net/ICADORG/citeverteproject  The project is an advocacy project, aimed at promoting the culture of pre-sorting of wastes in Dschang. In a bid to align with the UN Climate Action, propagated by the UN Secretary General, Antonio Guterres, this startup decided to carry out concrete actions by offering free 40 thrash separators to 20 students’ hostel as a pilot of the project. Each of these 80 litres thrash buckets contain well defined instructions, where biodegradables are separated from non-biodegradables. As such, the over 20% of recycling resources that are used to pay sorters, will be saved.

A monitoring and evaluation mechanism after the launching ceremony will be put in place, where the project team will visit the hostels every 3 weeks to control the usage of the thrash buckets.

What are the innovations of this project?

Besides the field visit by the project team, an e-monitoring platform will be used to track the usage of the thrash separators, where the beneficiaries will be constantly sending pictures on the usage of their thrash buckets online, for them to be rated online.

Secondly, bulk SMS will be used, whereby, each hostel is given a short code, which will be communicated to ICAD, for a prompt collection of wastes when the thrash buckets are filled.

Lastly the implementation of the P4P, where waste plastics will be traded for photocopies. Students from our beneficiary hostels will pay photocopies at our center with waste plastics. Our quota is 2 plastics for recto photocopy. This is a move to promote SDG 4, since we noticed that about 61% of students’ resources go to the photocopy of notes and handouts.

The collected wastes are then recycled/upcycled into different outlets.

We were pushed beyond our limits, to think out-of-the-box. ICAD truly brings out the power in youths.

The GREEN CARPET AWARD: For the first time ever, an award ceremony will be organised in the form of a green carpet reception, and not the traditional red carpet (green carpet signifies greenery, nature and prosperity). During this Green Carpet ceremony, the best performing student hostels selected for this pilot-phase of the project will be awarded prizes. The event is scheduled for Friday 5th June 2020, the World Environment Day.